Identity In A Culture Of Immanence

Kurukshetra is a mythological war between the Kauravas and Pandavas. The interesting part of the war are the strategies involved. Despite the abundance of power, skill, and bravery displayed by the protagonists (the Pandavas), it was their strategy that won the war. Brains over brawn is the subtext, which is why 'Kurukshetra' was the name given to an intra-college technical festival for which this poster was made. 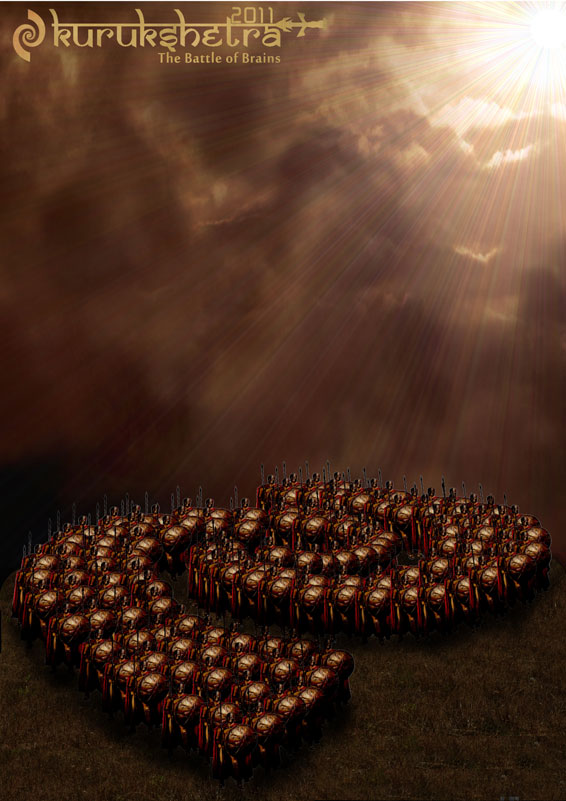 Teaser for Kurukshetra 2011
The artwork itself is Post-Modern, Pop Art, based on the popular blockbuster movies of the time. With the warriors taken from the movie '300' and background taken from the movie 'Batman Begins', this artwork is an appropriation of these two movie posters. Put together, the warriors are on the battlefield standing in a formation that resembles the Kurukshetra logo, the warriors are ready and are eagerly awaiting battle, which worked well considering that this is a teaser. An interesting question comes to mind; how did someone in India make a poster about a mythological war from the Mahabharata, using the Spartans from Greece?
To elaborate the question, how did the Spartans end up on the poster instead of the Pandavas? How did something that happened in Greece, in the late 480 BCE, replace something that was passed on from generation to generation? This is where Technoscape comes in, the global landscape of technology, with the advent of TV and the Internet, it's become easy to connect with people all over the world, and take part in their culture. Marshall McLuhan uses the term 'Global Village' to refer to the global effect of electronic media and information technology. The key words here are Globalization, Technoscape, and Mediascape. Throughout this article, I will try to show the influence of Technoscape and Mediascape, its effect on Globalization, and its role in creating this artwork. It is interesting to note that the artwork was created using GIMP, GIMP is an open source version of Photoshop. GIMP is a part of the anarchoculture, one that is born in opposition to the Culture of Transcendence, It's important to know that Mahabharata belongs to the Culture of Transcendence.
What is the Culture of Transcendence? It is a culture where knowledge is passed on in levels, here knowledge is passed on from generation to generation. If we take a look at the Mahabharata, at the time it was written, it was written in Sanskrit, the language of the few (the educated). Mahabharata was written to spread the base of Hinduism and it still used for that. For a long time, the Mahabharata and the Ramayana were the only stories that depicted bravery, intelligence, and courage. Because of the Culture of Transcendence there existed a barrier between the educated and everyone else, one having more knowledge about the writings in the Mahabharata hence associating themselves more with the divine. With the wide spread of media and media technology there came a wider exposure to different cultures, no longer were there only a few stories of heroism, there were many from cultures all over the world. And especially with the advent of the internet, there is no longer one expert, there are so many people with their own interpretations on how an event would have taken place, you can basically go online and create your own version of your own hero. Going back to Mahabharata, even though the Pandavas were timeless heroes, they were timeless, they held on to the traditions passed down by the Culture of Transcendence. The Spartans, on the other hand, changed with time, they became more pop culture, they changed with time and audience, there is a clear difference between the Spartans in 'The 300 Spartans (1962)' and '300 (2006)', and they will forever keep changing to suit the current audience. Thanks to the internet there is more fan art put out there every day by ordinary people who are ever pushing and ever changing the way we perceive these heroes. The Culture of Immanence slowly takes over, with its ease of access, eagerness for new ideas, and its ever-changing form that keeps accommodating its growing population. The Culture of Immanence is a product of Technoscape and Mediascape, both of which aids the process of Globalization. King Leonidas from The 300 Spartans (1962) and 300 (2006)
With that said, the Culture of Immanence and Globalization has made the identity of an individual hard or even impossible. Arjun Appadurai defines the central problem of modern day globalization as the tension between homogenization and heterogenization. The Culture of Immanence, the internet is a homogenizing agent, it still propagates Americana. The internet being born in the United States and the search tools we use to search information on the internet like Google is based in the United States it is no surprise that the majority of the information found online is contributed by users from 'the west'. Even though the internet is not an active homogenizing agent, it does spread the 'western culture' more, just by the fact that the majority of information found is 'pro west'. Appadurai argues by saying as rapid as forces from various metropolises are brought into new societies they tend to become indigenized. Like the Spartans in the artwork, even though the Spartans seem out of place in the mythological battle of Kurukshetra, they are more fitting there in the Globalized world that the Pandavas. Being on this poster the Spartans no longer represent their bravery in the Battle of Thermopylae, they no longer represent their loyalty for Greece, now they are the embodiment of courage, intelligence, dedication, and loyalty. The Pandavas stood for the same. So by replacing the Pandavas with the Spartans it creates a wider audience, even people who don't know about the Mahabharata would be intrigued by the poster, they would get that the poster or the event advertised by the poster involves intelligence, dedication, and bravery. But like the Spartans in the poster stranded in the battlegrounds of Kurukshetra, Globalization has stranded us in the constant struggle to find home.
Where is home? Home is no longer where we are born. Thanks to the anarchocultural nature of Technoscape, nation-state has lost its relevance. No longer do we look up to the Culture of Transcendence for who we are, we look through the Culture of Immanence and find out who we are and where we belong. And like the Spartans, we do find ourselves stranded. Sometimes we even have to leave 'home' to peruse the identities that we've built around ourselves. To become who we perceive ourselves to be, no longer is home where we are born or raised but where we fit, where the identity that we have built around ourselves fit the most. In that pursuit to find home, our identity also changes with it, every time we interact with a culture we absorb parts of it, changing our identity in the process. So every time we learn something from our new home, our identities change as well, where we fit in today might not be a great fit tomorrow. In that sense like the Culture of Immanence, like home, our identity is ever changing, constantly being influenced by Technoscape and Mediascape. Here the Spartans fit perfectly, they embody the spirit of the event in contemporary media at the time, but their meaning will change depending on where and when this poster is seen again. In a way the Spartans in the poster are not waiting for battle, they are waiting for their new identity put onto them by the viewer.
Below is the artwork 'Diaspora' by Antipas Delotavo, here you can see people who have their backs towards us, indicating that they are moving away. With the number of bags and the size of each bag, it is clear that they are traveling a great distance for a long time. Some are traveling alone, some with families. By the lack of enthusiasm, it is clear that this trip is not one of choice but of necessity. The artist Antipas Delotavo is from the Philippines, he made this artwork to show the migration of Filipinos. About 10% of the Filipinos work out of the country, Delotavo used it as inspiration for this art, to show the effects of Globalization and the need to move out of the country to earn a living. Like the Spartans in the poster these people are trying to find a new 'home' where they can fit into the growing demands of Globalization.

Diaspora by Antipas Delotavo
Even though Technoscape and Mediascape have created a sense of a Global Community, it has also created a more homogenized society, even though indigenized in its own way, we still are connected, and sometimes there arises a need to leave our home and family to fit into this Globalized Community. In a way, it is bridging gaps but creating new ones. There is a loss in the sense of identity, no longer is identity a fixed one, it is ever changing. Globalization has stranded us in the sea that is the Culture of Immanence, where our identity is defined by where we are and when we are.